I guess things started the night before, although I didn’t realise it at the time. But Eleanor [Sara’s first child] knew! She’d been slowly weaning off breastfeeding throughout my pregnancy. In fact, I think it had been a month since she’d asked for a feed. But Friday night, she climbed onto my lap for a cuddle, and pulled at my shirt.

I was surprised, but of course I said yes. Got her into position and she put her mouth over my nipple…I looked over at mum, a bit upset, and said “She’s forgotten, she’s forgotten how to latch.” But she stayed there for about the length of time she used to feed for – about 5 minutes, then sat up for more cuddles.

I then said to her that it was bedtime and let’s go upstairs. She refused, just wanted to sit and cuddle in front of the TV until she went to sleep. Once she was deeply asleep, I took her upstairs (or hubby did, I don’t remember which one of us did it). We headed to bed as normal, nothing else out of the ordinary. Eleanor woke at 2am for a cuddle and resettle. Had a couple of tightenings while I was up, but not painful. Went to the bathroom on my way back to bed and went back to sleep.

Going in to labour

I woke at just on 4am. Lay there for a moment or two, listening, figuring I’d woken because of a noise Eleanor had made, but heard nothing. Started to settle myself back to sleep, but then felt the urge to get to the bathroom. Urgently. I jumped out of bed and as I took the first couple of steps, I thought I’d wet myself. Got into the ensuite, sat on the toilet and pee’d. Thought there was a lot there, considering I’d only gone at 2am, but didn’t think too much of it.

Went back to bed and started having what I now know were early contractions. I headed to the loo another couple of times in quick succession and told hubby that I thought my waters had broken, but that I was just waiting to see what would happen with the tightenings. By 6am, with hubby and I downstairs (he was supposed to be going into work early), I started timing my tightenings to see if there was a pattern.

Sure enough it seemed to be every 5 or 6 minutes, lasting 35 seconds. Hubby went and woke my mum, I had a shower, and hubby started trying to get in contact with one of his other employees to see if he would be able to take his place. I rang my midwife at 7:40am once that was confirmed and arranged to meet her at the hospital in an hour’s time. My contractions were now every 3-6 minutes, lasting 45 seconds.

Leaving for the hospital

We snapped some photos and then hubby and I went into the hospital, leaving Eleanor with mum (who was really upset initially, since we never had the opportunity to leave her with someone else). We got there, and hubby parked in the 10-minute parking near the door, with the intention of coming back down to move it once we’d met with the midwife. He popped inside and grabbed a wheelchair for me (walking brought on extra strong contractions for me, although I felt totally embarrassed to be getting in one!).

We got upstairs into the labour ward and the hospital midwives took one look at me and asked why on earth I was in a wheelchair (did you want me to have the baby in the corridor??? LOL). My midwife hadn’t arrived, so they popped me into observation until she got there. When she got there, she hooked me up to the monitor to check on bub and saw how intense the contractions were (seems I have a high pain threshold!) She said to me by looking at that, she’d take my word for it that my waters had broken, and we’d move into a birth suite.

Out came the wheelchair again!! So, we were now in the birth suite. I sat down on a hard-plastic chair and a doctor came in to put in a catheter (I was GBS positive, so supposed to have antibiotics in labour). He had to stop two or three times while I worked through contractions! I remember thinking that it was totally pointless putting it in but didn’t say anything since they were just following procedure.

Hubby ducked out to get some water from the fridge for me and my midwife hooked up the drip. Told me to hop on the bed while it went through. I stood up and literally couldn’t move because of the contraction. I leaned on the end of the bed and worked through it, telling the midwife that I thought they’d better get hubby back in. He came in, I grabbed a quick drink of water off him and then it was all go!

I still hadn’t moved from the end of the bed. In fact, I’d sat back down on the chair. With the next contraction, I turned to my midwife and said, “I think I’m pushing!”. Her response was “Yeah, you do sound a bit pushy!” So, she unhooked the antibiotics, hubby helped me stand up and she pulled my trousers off. Up onto the bed after another contraction…on my knees, hands at the edge of the bed head, which was raised. Very next contraction, I just went with it.

I pushed and pushed…eventually I came back to myself enough to hear hubby, my midwife and a hospital midwife (who’d heard the noise and poked her head in) were all yelling at me to stop pushing, lol. Another 2 pushes, and she was out, and being passed between my legs for me to cuddle. Hubby helped me turn over, he cut the cord when it stopped pulsing and they delivered my placenta.

Had a tear that was officially classed a second degree, but my midwife called it a first degree. The doctor that came in to stitch me up asked if I’d had any pain relief…my midwife laughed and said there hadn’t been time! From arriving at the hospital to birth time was 1 hour and 15 minutes. 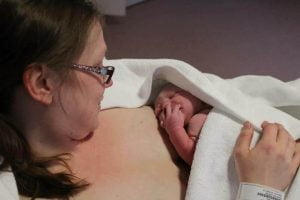