How To Increase Chances Of Getting Pregnant

Getting pregnant is a dream for many couples who are trying to conceive. For some, having an addition to the family can be a source of great joy and new adventures in the future. This complacent image is usually distorted upon the realization that getting pregnant does not just happen overnight for most couples. In fact, for most couples who are trying to become pregnant, the likelihood of pregnancy is 15% to 25% in any given month depending on your age.

How can I increase my chances of getting pregnant?

Essentially, pregnancy occurs from the fertilization of a male’s sperm and a female’s egg or ovum. Unlike the male’s sperm, the female’s egg or ovum is slightly more elusive and only appears during the ovulatory phase of the menstrual cycle. To top it off, it only has a lifespan of 24 hours so to get pregnant, couples have to ensure that they have intercourse around the ovulation. Thankfully, sperm can last for up to 3-5 days in the female’s reproductive tract so this increases the length of the fertile window.

According to the Fertility Society of Australia, the fertility window consists of 6 days, starting from five days before ovulation through to the day of ovulation. Besides, it is also outlined that if intercourse happens 3 days leading up to and including ovulation, the percentage of conceiving increases steadily to 27%-33%. Whereas, in comparison, if a woman has sex 6 or more days before her ovulation, her likelihood of getting pregnant is virtually zero. 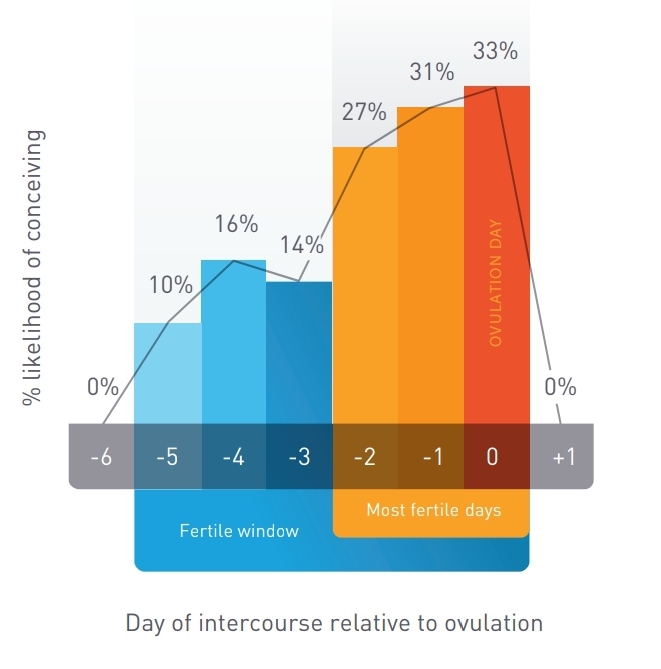 Image courtesy of The Fertility Society of Australia.

What is Well-timed Intercourse?

Well-timed intercourse simply means having sex at the peak of fertility to maximize a woman’s chance of getting pregnant. As mentioned above, the fertility window revolves heavily around the date of a woman’s ovulation. For a textbook 28-day menstrual cycle length, the ovulation would typically fall on Day 14, but the cycle length, of course, varies from one woman to another.

Therefore, identifying the ovulation day for a woman is the first and foremost step to increasing your likelihood of getting pregnant through well-timed intercourse. In an optimal conception plan, couples may have intercourse at least every other day during the fertility window and another session of intercourse after ovulation has occurred.

How to predict ovulation?

​​​Now that it has been established that learning about the menstrual cycle is important for couples to increase their chances of getting pregnant, it is imperative to get educated on ways to recognize ovulation. In short, there are 3 groups of methodologies to detect and predict an ovulation namely the signs of ovulation, symptoms of ovulation and thirdly, through a biochemical test called ovulation predictor kit (OPK).

Firstly, the signs of ovulation that a woman should be aware of including a change of cervical fluid into an “egg white cervical mucus” which is the most suitable medium for sperms to thrive in the woman’s reproductive tract. The next sign of ovulation is a change in cervical position and firmness whereby a woman’s cervical opening or os would be slightly more opened during her fertile days. In addition to that, the cervix itself would be located further up in the vaginal canal and would assume a softer consistency.

The other sign of ovulation is a rise of basal body temperature (BBT) due to the increase of progesterone which happens just after an egg is released. To measure a BBT, women should use a reliable BBT or ovulation thermometer that is accurate to the second decimal. The Fertility2Family’s BBT thermometer is highly recommended for this purpose due to its high reliability, sensitivity and affordability.

The third way to get an idea of identifying your ovulation day is through the use of ovulation predictor kits (OPK) which will be discussed further in the segment below.

Fertility2Family ovulation predictor kits (OPKs) provide a new avenue for women to have a more precise idea of their fertility window and assist with getting pregnant. Various available OPKs can easily be purchased online and from chemists ranging from dip and read strips to digital ovulation tests, just to name a few. However, the most common but still highly reliable and dependable OPKs are ovulation strip tests which can also be known as dip and read ovulation tests which can be easily performed at the comfort of your home.

The scientific mechanism behind OPKs lies in their ability to detect a rise in luteinizing hormone (LH) which happens approximately 24-36 hours before an egg is released in the ovary. Again, by stressing the basics of ovulation, we can deduce that a spike in LH coincides with the impending release of a mature egg from the ovary. This spike of LH is utilized in OPKs to signal when ovulation is about to take place.

Although there are various instructions on how to use ovulation test based on different brands, generally, you should conduct an ovulation predictor kit like a pregnancy test. Women are advised to start testing their urine sample with an OPKs starting 2-5 days before their expected day of ovulation. The best time to conduct an ovulation test is roughly between 10 am to 8 pm to account for the later surge of LH later in the morning. Most OPKs come with 2 lines: control and test line. When the test line is as dark or darker than the control line, then this indicates a surge in LH.

Fertility2Family ovulation tests offer high precision with more than 99% accuracy at detecting an LH surge that directly corresponds with ovulation.

Positions, orgasms, and lube for getting pregnant

There are studies and evidence that using fertility-friendly lubrication can increase sperm motility and viability. These are important when trying to get pregnant. Conceive Plus is the only fertility lubricant that contains Calcium and Magnesium ions to support fertility and the process of conception.

​​​​​Other questions about getting pregnant

Can you get pregnant during your period?

The simple answer is yes. it is possible to get pregnant if a woman has sex during their period. While the odds for pregnancy are very low but not zero. Having a shorter menstrual cycle of 21 days can increase the chances of getting pregnant during your period.

How to get pregnant fast?

Many couples want to get pregnant fast as possible. There is no way of ensuring a successful a speedy conception however by following the science and evidence the above tips will increase your chances of getting pregnant.

Can you get pregnant from precum?

Yes, it’s possible to get pregnant from pre-cum.

Pre-cum is a lubricant produced by a gland in the penis. Pre-cum doesn’t contain sperm. One study found that 16% of the male participants have alive and mobile sperm present in their pre-cum.

How long does it take to get pregnant?

Most couples under the age of 35 will get pregnant within the first year of trying to conceive if they have regular unprotected sex while tracking their fertile window.

Can you get pregnant while breastfeeding?

Trying to Conceive: Tips & facts to increase your chances

How Often Should You Have Sex To Get Pregnant?

Trying To Conceive: 10 Things You Should Know About Sex & Getting Pregnant